Whether solo or with friends, The Skally Line brings the old stories of Minnesota to life with rip-roaring energy and passion!

Where’d The Name Come From?

The Skally Line was a passenger rail started by the St. Paul and Duluth Railroad. While the ownership changed over the years, the line ran from 1877 to 1967 connecting the Twin Cities with Duluth for nearly 100 years.

But the Skally Line connected older roads. It paralleled the Government Road, a corduroy road finished in 1861 from Point Douglas to Superior. That road followed still older trails up the St. Croix River used by Dakota, Ojibwe, and older peoples going back thousands of years.

There are a number of stories about how it got its name but the one that sticks with me is that Swedish people, looking to travel north to meet relatives, would go to the ticket booth and say “Jag skulle ga till Duluth”: I would go to Duluth.

Over the years it connected Minnesota’s mines and woods with its farmlands, it connected the Great Lakes with the Mississippi River, and it brought widely scattered towns and people a little closer together. Isolated communities suddenly had access to goods, services, and ideas from all over and city folks from far and wide learned the enchantment of the lakes, rivers, and wilderness. People stayed in touch with distant friends and family for the price of a ticket.

Climb On Board Folks and Don’t Be Slow!

The Skally Line steams its way around the curves and bends of early American music:  Stringband blues, Appalachian ballads, fiddle tunes, early country and bluegrass, and Tin Pan Alley music. Along the way, we tell you forgotten stories about old Minnesota, play original music rooted in that history, and have a rip-roaring good time.

We are a band dedicated to creating an experience through old-time music and song with a focus on Minnesota history and story. We do what we love and we love what we do and we’re confident you’ll want to climb on board for the ride.

The Skally Line’s main line-up is Fred Keller (mandolins) and Bill Cagley (guitar, banjo, and limberjack), but because we play all sorts of different shows–from teaching in schools to barn dances to everything in between–we have a group of folks we call to help out!

(Mandolins) I’ve played music professionally for two decades. I’ve learned from some of the best mandolin players around, including master classes with the renowned Mike Compton. I played my first gig solo at Minnesota’s renowned Renaissance Festival which led to a series of Irish bands: Turmeric, The Lilting Banshees, and finally The Banshees. I co-founded the respected eclectic acoustic trio Catskinner with Chris Jones and guitarist Matt Fox. After one year with Minnesota’s Blue Drifters bluegrass band, I founded–with Joel Olson, Chris Jones and Ross Willits–the Whistlepigs String Band. The ‘Pigs played for eight strong years, released two albums (including the award-winning Fenceline title), traveled five states and Saskatchewan, and had a hell of a great run before hanging it up in 2009. Since then, I’ve worked with well over a dozen players, taught lessons and played a lot of solo shows too. I’m ecstatic to don the engineer’s cap on this wonderful new project. 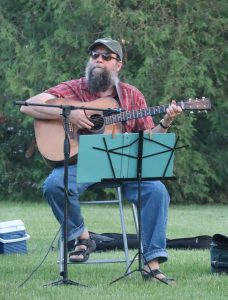 Bill is a full-time musician who learned music in Waterloo and Iowa City, Iowa.  He has been a full-time professional musician since 1987, performing at colleges and schools across the United States and many parks, including Yellowstone National Park.  Bill has recorded two classic collections of old-time fiddle tunes with fiddler Tom Schaefer, banjo player Bob Black, and bassist Sandy Njoes. He appeared on Greg Brown’s recording Down in There. He has also released several outstanding albums with Stu Janis, hammered dulcimer, in Greenwood Tree. 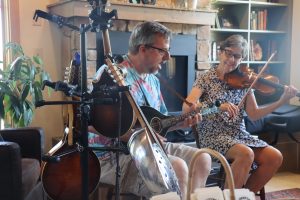 Teresa credits her 4th grade music teacher and her parents for instilling the love of the violin, and the desire to continue playing through college and beyond. She enjoys playing blues, folk, classical, country, and anything in between. Teresa loves to enter and sometimes win fiddle contests throughout SEMN and the MN State Fair. The best part is connecting with the audience through the music.

Banjo and guitar.  Mike and I played together for about a year or two in a band called Bohemian Flats. Mike’s about the most fun guy I’ve ever played with on stage. He picks guitar and banjo, writes great songs, and he’s also one of our finest up-and-coming banjo builders (check out Dogwood Banjos). Based in Minneapolis, Mike’s been selling his work all over the country for the past few years.

Eric Paulson from St. Paul, the regular bass player with The Roe Family Singers, anchors The Skally Line’s low end but in addition to being a stellar pipe carver, he’s working on adding bones, fiddle, banjo, and a number of other instruments to the mix.  A nicer guy you will not meet!

(guitar and fiddle) A native of New York, Tom has been a part of the Twin Cities music scene since the late 1970’s. He performed as a guitarist and vocalist for nearly two decades with the bluegrass-influenced acoustic groups the Jugsluggers and then Studebaker Hawk. In the early 1990’s he began concentrating his efforts on electric guitar, performing in numerous original and cover rock bands including Looking for Mom, Audio Savant and CPR. He still performs with CPR today. Recent years have seen Tom returning to his acoustic roots on board The Skally Line.

(clawhammer banjo)  Rob Daves is a Twin Cities banjo player who specializes in old time Appalachian and Midwest string band music.  He hails from North Carolina where he grew up listening to old time bands on Charlotte radio and TV in the 1950s.  He took up the banjo during the early 1980s while some of the older traditional musicians in the South were still teaching their fiddle, ballad and string band music to young fogies like himself. Rob has played for the Wild Goose Chase Cloggers in the Twin Cities for nearly a decade, performing in the Upper Midwest internationally.  He teaches clawhammer banjo at Blackbird Music in Minneapolis and currently plays with The Gritpickers Oldtime String Band.

Texas-born Bob Douglas has lived in Minnesota since his college days. During that time, he worked with acoustic ensembles and jug bands, performing at coffeehouses on Minneapolis’s fabled West Bank. Music became a full-time vocation in Germany when he teamed up with a Canadian group called The String Band, completing three European tours and two recording projects. In the early years of A Prairie Home Companion, Bob did mandolin duties, sang harmony, and played spoons on the show with the Powdermilk Biscuit Band and the New Prairie Ramblers. Recently retired from the University of St. Thomas in St. Paul, he currently performs with the Blood Washed Band, the Show’d Up Band, and the Tune Jerks.

Mark lives in Two Harbors and has led the Sir Benedict’s Thursday night jam for decades. He played with and toured Europe with The Wild Goose Chase Cloggers in 1995-1996, anchored many a north country dance band (most recently McInnis’ Kitchen), and comes from “a tradition of Appalachian fiddle music (with) strong influences in New England and Sligo fiddle styles.” If you bring him an accordion and some vodka, he might also be able to play you a Russian tune or two.

Walt Burns, Guitar.  Walt, from Norfolk, Virginia originally, is relatively new to the Twin Cities music scene. A veteran of numerous bluegrass bands down south and out west in Montana (recently Jawbone Railroad), Walt enjoys the energy and power of the real early stringbands, both blues and country. Walt shares my love of pre-war stringband music and I’m excited to get to play with him.