I grew up without the blessing of a close-knit extended family.  My maternal grandmother died just 6 weeks after I was born and while I knew my other grandparents we weren’t close.  We saw each other a few times a year, I got cards with five dollars in them, but mostly we lived too far away for me to have grown up in an “aura” of grandparenting.  When I met Cary Steeg, although he claims that his own grandparents aren’t much interested in his stories, I immediately thought “this is what I missed.”

I was introduced to Cary through mutual friends who live out his way in the hinterlands past Finlayson, MN.  I told him I was interested in old stories about the region and he told me to come on over.  He lives in the woods just up the hill from a secluded lake: an idyllic north woods setting.

I didn’t have a script or a list of questions.  I sat down with him on his screen porch and he started talking.  Every so often I’d get in a question or ask him to clarify but mostly he talked and told stories about his life for well over an hour while I recorded.  We took a break, he showed me around, and then we talked–I mostly listened–for another hour or more.

I try to frame this episode a little bit by focusing on the idea of work.  Cary farmed for fifty years, was a lumberjack back in the ’50’s (next week’s podcast tells those stories), trapped fur, worked as a lineman for a local power company, spent a month in the Amazon basin with a native tribe and got his hand chewed up by piranhas, nearly took up commercial salmon fishing in Alaska and in general crammed more living into his seventy-five years than most people do in twice that span.

This episode rambles, takes you around the back way, treats you to glimpses of a kind of life long past in many ways and still present in others.  I will post pictures of Cary with Podcast Episode 3.  He talks about a cabin he built, back in the day.  It belongs to a couple friends of ours now.  Here’s a picture of it: 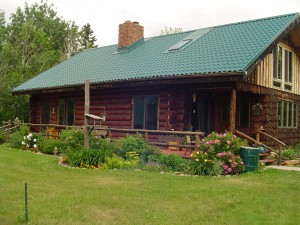 The couple who owns it now are great gardeners.  Here’s an article about their efforts which also mentions Cary and how he found the original name of the area that is now Finlayson.  It’s an interesting side bar but the main course remains Cary and his roundabout way of telling stories about the old days.  Sit back, grab a glass of something smoky and peaty and over 12 years old, and enjoy!

The song that I feature at the end–“Fenceline”–was recorded by The Whistlepigs, my old bluegrass band.  You can listen to it on this website under the “Take a Listen” tab.

Thanks for bearing with me as I learn this craft.  I’m improving.  Next week’s show will be another jump up and I trust I’ll be able to keep pushing it along.  Drop a note to say “howdy,” ask a question, suggest a topic, or give me some tips.  Look forward to hearing from you!