Welcome to the inaugural “Tales From The Deep North” podcast!  I’m excited to be doing this.  I have three shows done, tons of plans for more, and I can’t wait to hear from you about what you find interesting.  I plan to release a new episode every two weeks so pay attention to this site!  In addition, it will be available in iTunes.  As soon as it clears their version of the TSA I’ll embed a link here.

For now, please CLICK HERE to access the podcast audio.  I’m in the process of figuring out some technical details and hope to have it embedded in the future.  If you have feedback on how to do that, I use Libsyn to host the podcast and this is a WordPress website.  Thanks for any help!

Back in July, 2015, I sat down with Ken Martens, a historian down in the Afton, MN area, and got him to flesh out the story of one of Minnesota’s first roads.

When I first moved to Sandstone, MN, I stumbled across a street sign with the name “Old Military Road.”  I had no idea what that meant.  Over the course of a year or two I unearthed a few facts:  It started at Point Douglas, MN, and ended up in Superior/Duluth.  Construction began in 1851, finished in 1860 or so, and by 1871 the road disappeared, replaced by railroads.  But towns had been planned, migrations dreamed, whole economies predicted which ultimately perished on the vine.  I became entranced by the notion of a history that never came to be, that existed just out of sight, that MIGHT have been.  I wrote a song called “The Government Road” which seems to move people.  At any rate, I like it even though it took me a long time–five years–to figure out just how to set it.

I won’t say a great deal about this episode.  I think Ken does a marvelous job telling the story.  Ken’s book “The Perilous St. Croix River Valley Frontier” can be purchased HERE at Amazon.  You can also find it at The Afton Historical Museum, a wonderful place and well worth the drive.  Ken Martens does have a Facebook page; look him up if you’d like to speak with him.

I think this map should also prove interesting.  I purchased it from an antiquarian bookseller.  It came originally from an early report to Congress on the road’s construction progress back in 1855. 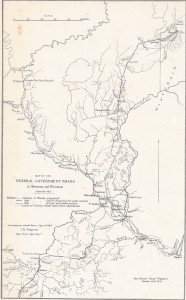 UPDATE:  The show is up on iTunes now at THIS LINK