This episode features stories of the old lumber days as well as Cary Steeg’s reminiscences of his time in the lumber camps around Ely, MN back in the 1950’s.  You listen to it HERE through Libsyn or HERE at iTunes (as soon as it clears their scanning).

Logging started in Minnesota in a small way in the late 1830’s.  It reached zenith by the 1890’s and was largely over by the 1910’s:  a short but furious and incredibly lucrative (for the Weyerhauser’s of the world) stretch of time.  This episode discusses a few relatively unknown aspects of the lumber industry.

One of the most fascinating and romantic aspects of the early days was the raftsman.  Give a listen and hear about Stephen Hanks, the first raftsman in Minnesota, and find out about his famous family member.  I read a bit from a wonderful book–can’t recommend it highly enough–called “A’ Raftin’ on the Mississipp” written by a man named Charles Edward Russell, famous muckraking journalist and co-founder of the NAACP.  A grand silent raft, complete with cook shed, shacks for sleeping, and fiddlers floating down the St. Croix or the Mississippi:  How wonderful would that have been to experience? 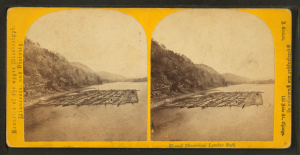 I found a wonderfully lurid story of old Bruno in a local history book.  I wrote a song about it called “Three Little Drops.”  You’ll hear both story and song in this episode.

And finally, what could be more fun than to listen to Cary Steeg talk about his days as a lumberjack?  Find out about Logger’s Pox, Spreeing Lumberjacks, the old lumberjack supply outfit in Duluth, woodbutchers, and man-catchers.  Here are a few pictures of Cary and some of the tools he collected over his life.  The first two show him illustrating how to use a Finn Hook: 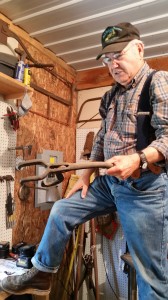 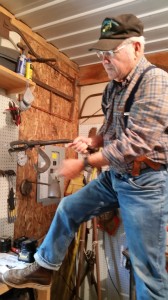 And here are some of his old logging tools: 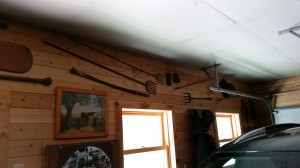 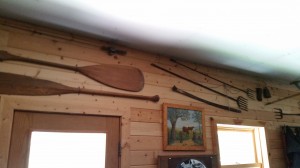 I hope you enjoy my salute to the shanty boys, so called because of the shanties in which they spent their winters.  Here’s what they looked like:

One Response to “Episode 3: Stories of the Lumberjacks, Cary Steeg Interview Part 2”