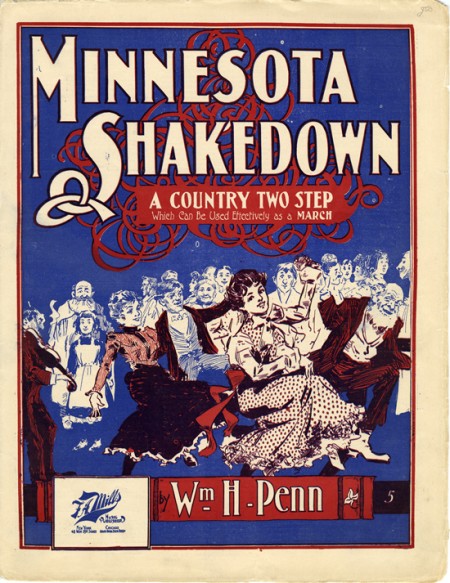 “Once I was spending the evening at Burchineau’s place when a number of the Red River cart men were there. As they were part Indian and part white, I looked down on them. One of them challenged me to see who could dance the longest. I would not let him win on account of his color, so danced until my teeth rattled and I saw stars. It seemed as if I was dancing in my sleep, but I would not give up and jigged him down.

I remember a dance in the messhouse in ’48 when there were ten white girls who lived in St. Anthony there. They were wonderfully graceful dancers—very agile and tireless. The principal round dance was a three step waltz without the reverse. It was danced very rapidly. The French four, danced in fours, facing, passing through, all around the room, was most popular. The square dances were exceedingly vigorous, all jigging on the corners and always taking fancy steps. We never went home until morning, dancing all the time with the greatest vim”.

Dear friends of ours will hold a dance this Saturday night at a neighbor’s barn (their own barn being full of hay). This will be the eleventh or twelfth annual Honor Dance commemorating the passing of their youngest child and at the same time celebrating the life and joy and friendship all around them and us. I get to be in the ad hoc band and nothing pleases me more.

The barn dance, kitchen party, or house dance no longer serves as the focal point of community but I wish it did. Could just be the romantic, things-were-better-way-back-when in me, but it’s a tradition that bears reviving. In small ways you find dances all over the state, especially if your area has a group such as the Tapestry Folk Dance Center or another similar group. But by and large, dancing is a special occasion, not a regular community event.

The quote above comes from Mr. Caleb Doerr, an early settler. Minnesota would not even be a territory until 1849. St. Anthony predated Minneapolis. The land which would become Minneapolis still belonged to the military.

While I deplore the racism inherent in this account, it does point up the fact of community in early Minnesota. Metis people—descendants of French traders and (largely) Ojibway people— outnumbered whites by a great deal and they in turn were outnumbered by many thousands of Native Americans. Settlers relied upon Native and Metis people for survival and community. And occasionally they did dance together.

What music may have been played I don’t entirely know. The fiddle would have featured prominently. Many of the earliest settlers came from New England and Mid-Atlantic states, places with a long tradition of fiddle music. Other books I’ve read (for example A’Rafting on the Mississip’” by Charles Edward Russell) name a handful of well-known tunes such as Buffalo Gals and The Virginia Reel. Steam boats employed black musicians regularly and each ethnic enclave brought it’s own repertoire of tunes. Metis people also have a long standing fiddle tradition. Each group of settlers contributed their tunes and songs.

I would love to have been able to hear that music. The oldest Minnesotan dance tune I have run across is from sheet music. The Minnesota Shakedown, written by Wm. H. Penn, was published as a dance tune in 1900. By that time, it would probably have been more of a cotillion, or upper class, piece of music intended for polite dancing: nothing like what might have been played at a house cleared of furniture, filled with food and neighbors, and whipped to a spinning frenzy by stamping feet and flying fiddles.

I hope that barn dances come back stronger than ever. I know slews of musicians who play them. I’ve played my fair share and there’s nothing like it. I love watching people whirl around as the sweat pours off our foreheads and the tunes become animate in stomping feet and linked arms.

What could be more intimate than connecting with your friends and neighbors by touching, moving, shouting, and moving on to the next partner? What better way of getting to know people you see in the grocery store or pass by at the post office? It truly connects us. It makes us aware of each other in a very physical but respectful way.

Of course, I’m awfully glad I play an instrument. That way I don’t have to tread on anyone’s feet or bring the whole weaving circle to a crashing halt by tripping and falling. Being in the band is a wonderful thing.